For many years, I wrongly assumed that a loving, honest relationship would keep me HIV negative.

I foolishly bought into the thinking that simply decreasing the number of sex partners and being in a committed monogamous relationship would be enough to keep the big bad away from the door. This line of thinking came about as a result of scared people who encouraged us all to be scared instead of engaging in open and honest with tricks and lovers..

During the onslaught of this epidemic (by the way with African Americans representing 49% of cases it is still an epidemic), we were given a whole lot of information that constantly changed and was all about keeping us trembling and unable to make informed, intelligent decisions. 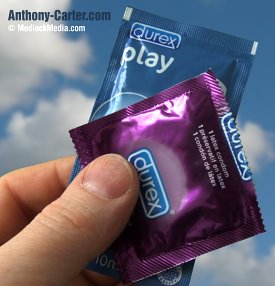 One of the major things trotted out for us to cling to was the belief that if we limited sex partners and stuck with one mate things would work out. All of this would work provided that you wanted one mate, the person you partnered with was honest and only wanted one mate and of course because they loved you so much would consent to being tested together over a particular period of time.

What a load of crap.

Coming of age during the beginning of this plague, I believed all of the afore mentioned ways of staying safe.

However, being the smart slut that I am, it was clear to me early on that I better come up with some very different approaches to sexual freedom and social responsibility.

If I didn’t want monogamy or the person I was refused to be tested, for whatever the reason, what was I to do ?

Here are a couple of action oriented and productive ways I got around much bs regarding sexual disclosures, playing safe and people who had less than my best interests in mind.

1. I assumed everyone was HIV positive and either didn’t know or was lying about it.

2. I brought up HIV status and asked when their last test date was and shared mine.

3. I assumed everyone was HIV positive and either didn’t know or was lying about it.

Being 19 and alone was no fun.

Still in the closet and afraid to death to leave it forced me to make awful decisions that could have cost me my life. This was no place to be in the hey day of HIV/AIDS in the late 80’s and early 90’s.

As a young queen, I was fearful and willing to do anything to be loved.

With this mind set, it was inevitable that I would either truly court death or come up with survival strategies that would help avoid it. Not knowing this kept me in this relationship far too long even beyond and amidst violence early on.

Having spent three and a half years with an emotional terrorist, it was clear that if I was going to make it in the gay community and live to see a ripe old age, I had better start taking care of business.

After having a look around and realizing that the years spent with an emotional invalid could either make me bitter and withdrawn or savvy and self reliant, I chose the latter.

At 19, I foolishly thought that if I had the best interests of my significant other in mind, he also was operating under the same set of standards (rules). I learned that nothing could be more ridiculous and life threatening.

Early on, he constantly manipulated, cajoled and reasoned that unprotected sex was the way to go and it made the most sense. When I protested, I received a psychological and emotional bitch slap.

After a series of those and the belief that he did love me(because I had such a warped sense of love at the time) and that there was no where to turn (systematic isolation), I relented and gave in to unprotected, highly risky sexual behavior for the duration of our relationship.

This went along with the “he cares and would never do anything to harm me” line of reasoning..

Taking responsibility at this young age meant I had to face some serious fears and take some action that I never thought possible. I had to look at my behavior and why I was willing to put my life in some one else’s hands.

During the course of this relationship where in which domination and coercion reigned, I learned some very powerful lessons

Staying healthy, happy and HIV Negative was my responsibility.

My status was and is under my control.