I’ve recently become familiar with Anthony Carter, his voice, his refreshing outlook. So when he asked me to guest post for him, I found myself in a quandary. Here I am trying to blog about my latest mystery release, on a blog that digs deep into how to live a better life. So I read several of Anthony’s posts. Took me a while to connect his blog and my mysteries . . . then it hit me.

That’s what I want my readers to feel in a character navigating a treacherous journey. The good guy, the antagonist, even the sensitive side-kick or the humorous secondary should not be in the book unless their lives change from the fear they experience in the pages. Change for the better? Maybe. Change for the worse? Depends. Change from what they were in the beginning of the book? Absolutely.

I write two series, the second being The Edisto Island Mysteries. Callie Jean Morgan, a homicide detective in Boston, once rode high and mighty, considered excellent in her field . . . until her excellence gets her husband killed when she takes down a long-pursued criminal element. Fanatically, she taps her skills to snare the killer, only to lose her job in the process. She’s left with a son to raise, her gold-plated career turned to rust, and goes home to her South Carolina Lowcountry family, and a mother she clashed with for as long as she could remember. She drinks, weathers panic attacks, and has completely lost her way. Her father hands her the keys to the family’s cottage on Edisto Beach, telling her to take the summer to get her head on straight, yet the first day she arrives, a murderer kills her childhood mentor next door. And the inexperienced six-man police force has never handled a murder before.

Now we have real fear. Callie’s fear of her inabilities, fear of disappointing her mentor, fear for her son’s safety, and fear that crime has followed her to Edisto, a place where she was supposed to hide away and figure out her screwed up self.

And the reader craves to learn how she’s supposed to carry so much fear and not fall apart.

In Anthony’s piece “Why None of Us Have Earned the Right to Let Fear Rule Our Lives,” he states when fear rears its head, it is clearly a time for self-examination. But in a quality mystery, we don’t want the main character to stop, analyze, and self-correct. In reality, we don’t always self-correct properly when our minds are frantic with worry. Instead, we knee-jerk react, discounting the right choices that our emotions aren’t willing to accept. Or we make decisions with half the facts. Or we wish for all our obstacles to vanish as we stick our heads in sand, pretending things aren’t as bad as they seem.

Those frail, human responses to fear are what make for the best storytelling.

Anthony goes on to state, If the worst has happened, and we’ve collectively survived it what else is there?

In the real world, this simple question can help us re-center. In fiction, this is the time where the author lets the character think this . . . then rains havoc for them letting down their guard. There’s always something worse, which makes for the best plots.

But then this seed sprouts inside us. Surely the bad guy can lose and the good guy can pull out all the unthinkable stops and wins.

We want to know there is hope beyond all odds. We just want to watch some other person struggle with it instead of us . . . while we secretly put ourselves in their place. 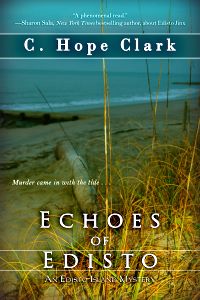 I heaped one misery after another on Callie Morgan. Death, misunderstanding, loss of family, loss of friends. Enough self-doubt for ten people. Readers felt her pain, stomachs roiling from the fear around every corner. But by the end of the book, they wanted her to seize her compass and point it in the right direction, empowered by her losses, educated by poor decisions, and guided by a need to make life right. (Key in the orchestra swell.)

The latest book in the series is Echoes of Edisto, book three, and it releases August 5. Our heroine has returned to law enforcement, regained her footing, hopeful in the choices she’s made for her future. Yet tragedy happens on her watch, costing her an officer . . . two weeks into her role as Edisto police chief. She suspects premeditation. She allows a split-second of second-guessing allowing naysayers to propel her mentally back to a darker period. But in the meantime, a criminal element eats away at her beloved Edisto Beach. She slowly loses trust in those around her as everyone’s closeted past floats to the surface, and all she knows is not as it seems.

Some people love mysteries for their challenge in tackling conundrums and fear. Others hate them for the same reason. I deem them healthy, allowing readers to dip into their fear, safely experience the scare, and close the book energized from the voyage. And in some small way, I like to think I offer people hope that fear can be overcome, both in fiction and in life.

BIO
C. Hope Clark is author of The Carolina Slade Mysteries and The Edisto Island Mysteries, with her latest release being Echoes of Edisto August 5, 2016. Hope is also a national speaker, teaching writers how to embrace their careers and earn a living at that which they love. She lives in her beloved South Carolina on the banks of Lake Murray, when she isn’t walking the sands of Edisto Beach. www.chopeclark.com / www.fundsforwriters.com